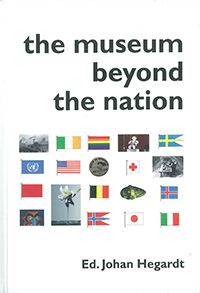 The museum beyond the nation

In a global, postcolonial and cosmopolitan context, contrary to a colonial and nation-based one, museums have to rethink their stories, their places in the world and the people whom they aim to engage: What stories are told and why? Who is the audience? How is the museum as a physical space structured? Is there a future for the museum as we know it? The Museum Beyond the Nation is a collection of nine essays, with an introduction by Johan Hegardt, all originating from a conference session in Kalmar, Sweden, in 20 I I. Peter Aronsson reflects on how museums represent ideas of memory and history. Darko Babic and Zeljka Miklosevic explore the possibilities of eco-museums and Mattias Ekman the stories behind Norway's National Gallery. Malin Grundberg shows how women have been excluded from museum narratives and from the history of Sweden. Dan Karlholm explores the multilayered narratives in the new Neues Museum in Berlin. Herman Lebovics presents an examination of identity politics related to the National Museum of the American Indian. Kylie Message explores contemporary collecting at the National Museum of American History and Fredrik Svanberg the collecting of national museums in general. Sir David Wilson discusses the relationships between British colonialism and the British Museum.