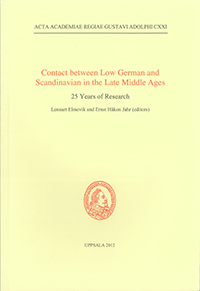 The Royal Gustavus Adolphus Academy for Swedish Folk Culture is a national academy based in Uppsala. According to its statutes, one of the means by which the Academy is to pursue its object of promoting research into Swedish folk culture, understood in a broad sense, is by publishing, in its various series, research findings in areas that it is charged with fostering. The main series is the Acta Academiae Regiae Gustavi Adolphi, the first volume of which appeared in 1933. Other series include Folklivsskildringar och bygdestudier (Studies of Folk Life and Local History), Kungl. Gustav Adolfs Akademiens småskrifter (Short Publications of the Royal Gustavus Adolphus Academy) and Svenska sagor och sägner (Swedish Folk Tales and Legends).

This volume contains the proceedings of a conference held at the University of Agder in Kristiansand, Norway, in 2010 on the new methods used in and findings emerging from the last twenty-five years of research into contact between Low German and the Scandinavian languages in the late Middle Ages.

The editor of the various series is the Secretary to the Academy, Associate Professor Maj Reinhammar, maj.reinhammar@agora.se.