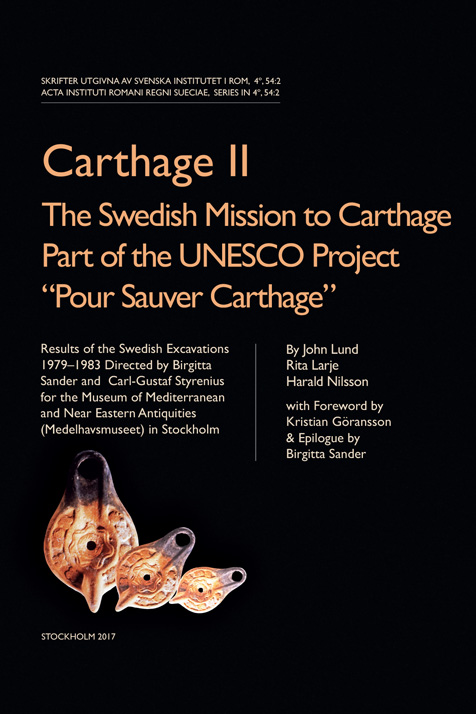 Carthage II: The Swedish Mission to Carthage Part of the UNESCO Project "Pour Sauver Carthage" – Results of the Swedish Excavations 1979–1983 Directed by Birgitta Sander and Carl-Gustaf Styrenius for the Museum of Mediterranean and Near Eastern Antiquities (Medelhavsmuseet) in Stockholm

This second and final volume on the Swedish participation in the UNESCO project "Pour Sauver Carthage" 1979-1983 presents three detailed studies of excavated material from the Swedish main Site A at Carthage: terracotta lamps, animal bones and coins. The site is situated in central Carthage on the highest point of the saddle between the Carthaginian heights Byrsa and Juno. Excavations unearthed somewhat unexpectedly a building complex with a small Roman and Late Antique bath. Approximately 7000 finds were registered, and of them only the three categories presented in this volume have been analyzed in their entirety. They show that the latest building complex was used through to the 7th century AD. Circa 893 (mainly fragments of) terracotta lamps found at Site A are published and analytically studied in Chapter 1. A large amount of bones from mammals, birds and fish are studied and analysed in Chapter 2. The catalogue of the coinage in Chapter 3 contains description of coins from the Swedish excavations at Site A and B. Of 1281 discovered coins 508 coins are considered identifiable and discussed here with photographs. Epilogue of this volume presents a summary of the excavation and its results.