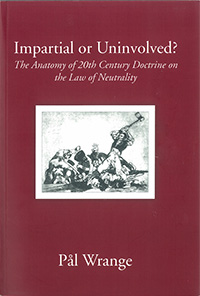 Impartial or Uninvolved? – The Anatomy of 20th Century Doctrine on the Law of Neutrality

It is an eternal question whether one should engage or not. Is it possible to be idle and indifferent when people seek freedom against an oppressive aggressor – like in Francisco Goya’s famous pictures?

This work focuses on neutrality as a 20th century international legal discourse. A number of doctrinal texts have been read both as legal arguments and as texts with philosophical and political implications. A well-known controversy throughout most of the century has been the relation between neutrality and collective security; how did neutrality, born in the balance of power, survive the League of Nations, total war, the United Nations, the Cold War and “the New World Order”? But that has not been the only issue. How come neutrality has not been extended to economic conflicts? Why is it not being applied to struggles with non-state entities? How could neutrality be relevant both in war and in peace, and what does that say about the peace?

The history of the legal doctrine of neutrality shows that the common dichotomy of involvement vs. indifference is too simplistic, and that there are many other nuances to the debate, for instance the distinction between being indifferently uninvolved and impartially engaged.

Pål Wrange lives and works in Kampala, Uganda, on a leave of absence from his post as principal legal advisor on public international law at the Swedish Ministry for Foreign Affairs.