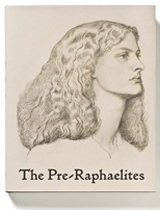 In the mid-19th century, a group of young artists shocked the Victorian art scene in Britain with a new imagery of vivid colours, serious moods and a challenging beauty. They called themselves the Pre-Raphaelites, to indicate that they sought their inspiration in art before the Italian 16th-century painter Raphael: in 15th-century early Renaissance and medieval art. Their paintings dealt with the eternal questions of love, passion, betrayal and death. This deep seriousness is present in all their work, whether the subject is from medieval tales of chivalry or scenes from their contemporary Britain. The leading artists in the group were John Everett Millais, William Holman Hunt and Dante Gabriel Rossetti.