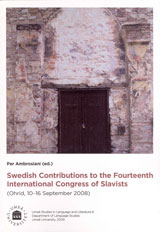 The present volume includes seven articles by Swedish Slavists presented at the Fourteenth International Congress of Slavists, which was held in Ohrid, Macedonia, in September 2008. The articles cover the following topics: Russian historical parish names, Hunno-Bulgarian loanwords in the Slavic languages, linguistic variation in the spoken language of contemporary Czech television, seventeenth-century translations of German and Dutch phraseologisms into Russian, the history of the translation of the South Slavic folk ballad "The Wife of Hasan Aga" into Swedish, the image of women in the works of the Polish weiters Natasza Goerke and Olga Tokarczuk, and the use of irony in Soviet totalitarian and anti-totalitarian discourse.