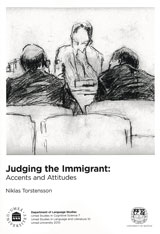 Judging the Immigrant – Accents and Attitudes

Spoken language as a means of communication contains huge amounts of information apart from the linguistic message that is conveyed. It is often the first channel of interaction between people and based on the speaker's manner of talk, we create a mental image of the speaker as a person, of the speaker's background, origin and personal qualities. Through five case studies, this dissertation investigates how immigrants to Sweden are judged based on their foreign accents and how the use of an interpreter in court can affect the legal process and the judging of the immigrant. It was found that although Swedish students hold predominantly positive attitudes towards immigration and immigrants, they judge immigrant accents based on perceived social desirability, or perceived cultural distance between the listener and the voice's country of origin. This suggests that even among a group who are positive to immigrants and immigration some groups of immigrants are more welcome than others. When this finding is placed in the bilingual court room and coupled with a lack of knowledge about cultural differences in dialogue strategies, discourse disfluencies and an interpreter who speaks foreign accented Swedish, it becomes clear that some immigrant groups are at a double legal disadvantage when being judged.