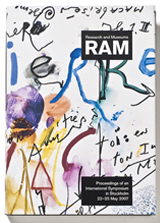 A total of 15 speakers from Denmark, France, Germany, Italy, the UK, the USA and Sweden lectured on the significance of museum collections for research at both museums and university departments. The watchword of the symposium was that research engenders exhibitions which in their turn engender new research. Their contributions, written in English, have been collected in this volume of proceedings published as part of the scholarly series issued by the Nationalmuseum and the Nobel Museum.