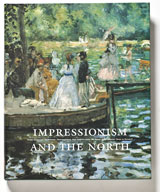 Individual essays are devoted to Paul Gaugin's stay in Copenhagen in the mid-1880s and Claude Monet's journey to Norway in the winter of 1895. Among the Scandinavian artists included in the catalogue mention may be made of Edvard Munch, Anders Zorn and Jens Ferdinand Willumsen.