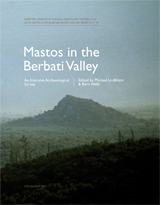 Mastos in the Berbati Valley – An Intensive Archaeological Survey

This study presents the results of a small but intensive surface survey conducted on the Mastos Hill in the Berbati Valley in 1999. While remains from the Early and Late Helladic period were known from previous excavations on its southern and eastern slopes, this is the first analysis of the entire hill. It includes a digital documentation of the local topography as well as an account of the archaeological remains retrieved in the field. The study fills a gap in different data sets and results gained through old excavations and the extensive 1988-1990 Berbati-Limnes survey.

The introductory chapter summarises previous work in the valley, discusses its ancient routes of communication and outlines the method employed in the archaeological survey. This is followed by an account of the topographical survey and the geographical information system used. In the six following chapters the archaeological remains are presented and analysed in a diachronic fashion. It is concluded that the hill was predominantly settled in prehistory with the exception of a small stronghold in Medieval times on its top terrace. A detailed petrographic study of ceramics found at different locales in the valley is also included.