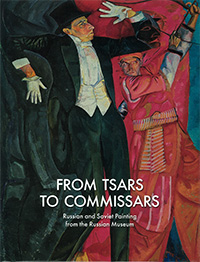 From Tsars to Commissars features art that sprang from a society that had undergone massive changes in the period of just over 150 years spanned by this exhibition. From the Tsar regime of the 19th century, through the revolutionary years of the 1910s and '20s, to the Stalin era and the Soviet superpower of the Cold War. We meet serfs, images dominated by Orthodox notions and traditions, and portrayals of the consequences of the social changes and major wars. Many of the works in the exhibition are characterised by strong narratives and emotionality. 19th century realism and Stalinist propaganda share a magnificently epic quality. But Russian art also encompasses some of the most radical alternatives to realist and narrative art in the early 20th century: Malevich's suprematism and Kandinsky's abstract expressionism.