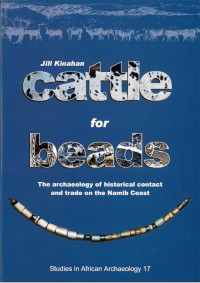 Early contacts between indigenous pastoralists at Walvis Bay on the Namib Coast and Western seafarers are poorly documented and little understood. Trade augmented regional exchange networks with a range, of archaeologically visible and easily identifiable objects. In this thesis I use a parallel classification and seriation of glass beads and imported ceramics to develop relative dating techniques. The sequence identities three phases of social and economic change. Until the nineteenth century, wealthy pastoralists controlled external trade and the circulation of goods inland. By the mid nineteenth century, British merchants had set up commercial operations at Walvis Bay and the regional network had broken down. Archaeological and documentary evidence agree that by the end of the nineteenth century, indigenous pastoralism at Walvis Bay had collapsed, and the people were, dependent upon wage-labour, charity and scavenging. Techniques developed here use trade goods to providehigh resolution dating, and other archaeological evidence to shed new light on the indigenous response to contact. These methods may be applicable to similar situations of contact arising from the global spread of Western commerce.