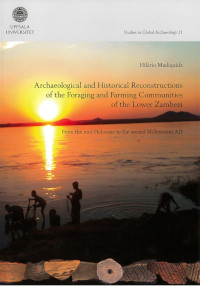 New archaeological surveys and excavations combined with historical and ethnographic sources, to construct a long term settlement history and historical ecology of the lower Zambezi River valley and delta region, in Mozambique. In total eight new archaeological sites have been located in archaeological surveys and two sites have been excavated. Lumbi has continous settlement from the Late Stone Age (LSA) to Early Farming Communities (EFC); representing a phase of an amalgamation of LSA communities into the EFC and Late Farming Community (LFC) occupation. The research in Sena provides new evidence of trade and treade networks from the mid second millenium AD and also of the Afro-Portuguese interactions. With these investigations, it is now possible to better understand an area, which for a long time has been neglected. The lower Zambezi River valley and delta presents a vast cultural and archaeological heritage which needs conversation work and extended programs of research.