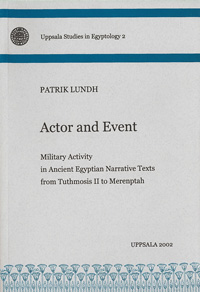 This study treats the function of the military writings of ancient Egypt, from Tuthmosis II to Merenptah (c. 1492-1203 B.C.), using the terms Actor and Event. The texts are analyzed in terms of four categories. The Dominion Records, consists of texts in which the focus is on the disruption of the king's control, expressed in terms of a rebellion. The monuments on which these texts are inscribed are in found in two contexts, either in areas that define the borders of .Egypt, or in temples, emphasizing the king's dominion as part of the reciprocal relationship between the king and the god. The king's participation in one or several military campaign(s) is the focus of the Expedition Records. The Achievement Records describe a variety of royal achievements., nonmilitary as well as military. The texts credit the king's ability to act to the god, motivating the placement of the Achievement Reports in a temple context. The Reciprocity Records presents the reciprocal interchange between the king and the god, describing the gifts given by the king in exchange for his accomplishments.