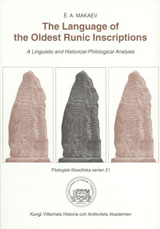 Ènver A. Makaev's "The Language of the Oldest Runic Inscriptions" was published in 1965, but it has never reached the broad readership it deserves within the world's scholarly community because it was written in Russian. Reviews in Western journals called attention to this work, but they could not replace direct access to the work present translation into English makes this important contribution to runic and Germanic linguistic scholarship available at last to the scholarly world at large, not merely as the subject of historiographical interest, but as a still valid appeal to runologists everywhere to abandon the wild and unfounded speculations so rampant in runological studies and to adopt a more scientific approach to these most ancient of all Germanic texts, in keeping with the advances in comparative and historical linguistics.