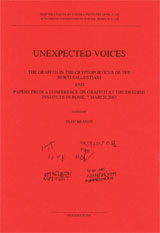 Unexpected Voices – The Graffiti in the Cryptoporticus of the Horti Sallustiani and Papers from a Conference on Graffiti at the Swedish Institute in Rome, 7 march 2003

This volume presents the results of a collaboration between the Swedish Institute in Rome and the Embassy of the United States of America in Rome. The object of the research was a cryptoporticus, part of the ancient Horti Sallustiani, in the area of the American Embassy, and especially the graffiti found on the walls of the cryptoporticus, which were also decorated with paintings. The cryptoporticus, which is dated to the first century AD, was excavated in 1949–1950 and in the 1990s, but the graffiti have never been completely published. In this publication, all the graffiti are discussed and dated. Some belong to Late Antiquity, others were made in the 16th and 17th centuries. The study of these graffiti gives important information about the later fate of the first-century cryptoporticus. Several unpublished fragments of wall-paintings are also presented, and more general historic and archaeological aspects of the cryptoporticus are discussed.

Part of the project was the first conference ever dedicated exclusively to graffiti. The papers of this conference discuss definitions and new methods for the study of graffiti and present graffiti from Rome, such as those from the Palatine (Casa di Augusto), ex Vigna Chiaraviglio close to the Catacombs of San Sebastiano, and from the Baths of Trajan, but also from Pompeii and Ostia.