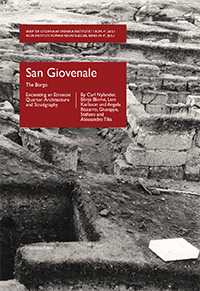 The Etruscan city of San Giovenale was excavated by the Swedish Institute of Classical Studies at Rome between 1956 and 1965. The ancient city plateau consists of two residential areas, the Acropolis and the Borgo, separated by a cut roadway. This publication deals only with the northwest corner of the Borgo (Borgo NW), which was excavated under the direction of Carl Nylander between 1961 and 1965. Here, in a "pocket" at the edge of the plateau, the Etruscans built a small metal working quarter, surrounded by a defensive terrace wall. Protected by the high tufa cliff a series of water cisterns and furnaces were installed. The excavations uncovered four major houses, Houses A, B, C and D, separated from each other by small drains and a Lane K. The houses, the drains and lanes are oriented west-east. A major well is located east and above House C. The most important settlement dates from the early Archaic period, in the late 7th century BC. The buildings were destroyed around 550/530 BC by a possible earthquake. The buildings were then rebuilt on a higher level and existed down to about 400 BC. Below the Archaic levels there are cuttings for huts and a wooden palisade.

The publication starts with an informative personal prolegomena by Carl Nylander in which the history of the excavations and the participating members are described. Chapter 1 is an introduction to the site and an analysis of the geology by Sheldon Judson. Chapter 2 gives the history of the work and Chapter 3 the settlement periods and the stratigraphy. Chapters 4 and 5 present the mainly rock-cut remains of pre-archaic structures. Chapter 6 attempts to describe the large work of levelling the area for the Archaic houses, called "The Great Fill Project". The following chapters are archaeological and architectural descriptions of the walls and houses, starting from the north: House A (Ch. 7), Houses B and C (Ch. 8), Lane K (Ch. 9) and House D (Ch. 10). The possible earthquake as the destruction of the early Archaic settlement is discussed in Chapter Eleven. Chapters Twelve and Thirteen reports briefly on the very scattered traces of later developments. The book contains several appendices: a San Giovenale bibliography 1877-2011, a catalogue of the walls at the site, an investigation of the mortar remains, a discussion on the roof-tiles and an explicatory text about the process of architectural documentation. Finally, the publication contains 43 plates with the very carefully drawn elevations and plans of the excavated buildings, originally produced by architect Börje Blomé, later digitalized and completed by Giuseppe, Stefano and Alessandro Tilia as well as by Angela Bizzarro.