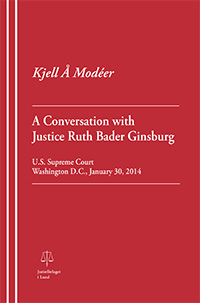 In 1961 at Columbia Law School the young lawyer Ruth Bader Ginsburg became a participant in a comparative project concerning civil procedural law. She was offered the Swedish part of it, and looked into the implementation of the new Swedish procedural law, Rättegångsbalken, which became effective in 1948. She learned Swedish and went to Sweden in 1962, where she met with her Swedish co-author Anders Bruzelius, a district judge from Lund, the old university town in southern Sweden. This part of the project resulted in a well-reviewed book, Civil Procedure in Sweden, and a translation of the Swedish procedural code into English. For these efforts each of them received an honorary degree from the Law Faculty at Lund University in 1969. In the 1970s Ruth Bader Ginsburg, then as a law professor at Columbia, became a national advocate for gender rights and took several landmark cases to the U.S. Supreme Court. From the early 1980s her career took a new turn. President Carter appointed her to serve on the U.S. Court of Appeals for the D.C. Circuit. President Clinton nominated her to be an associate Justice of the U.S. Supreme Court, a position she still holds.

In this extensive conversation with professor Kjell Å Modéer from January 2014 she tells the story of her career, especially her Swedish experiences and her fights for gender rights and interests in comparative law.