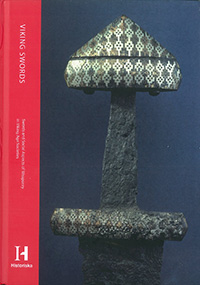 This book contains descriptions, dating and study of the social aspects of swords in the Viking Age society. In contrast with earlier models in which types of swords were presented as stages in a chain of development, 'types' are considered as variations of technological and cultural traditions and innovations. The concept of 'type' encompasses how the parts of a hilt were manufactured and decorated and how they were assembled into a whole piece.

In particular, interregional influences are reflected by the decoration of the hilts and the different types of baldrics/sword belts and scabbard chapes. The decoration of the Scandinavian swords represents the development of traditional motifs as well as innovations introduced through cultural interactions with the Frankish and German Empires, the British Isles and Byzantium.

The book comprises a catalogue of 832 Scandinavian swords, including details or fragments of swords. The finds are ordered according to provinces and parishes. Each catalogue entry is presented with a code for the province and a number for the sword.