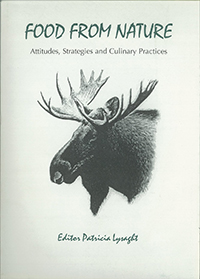 In the early summer of 1998 a group of international foodways scholars gathered at Umeå University under the auspices of the International Commission for Ethnological Food Research, and later joined with the Jämtland community in the parish of Frostviken, north-western Sweden, to explore the theme Making the Most of Nature in the production, provision and presentation of food.

The object of the meeting was to promote discussion of the historical and contemporary dynamics of wild foods in the diet and food habits of environmentally and climatically diverse regions of the world. The harsh environment, delicate ecological balance, yet rich natural food resources that characterize Frostviken, was an appropriate setting for such discussion.

FOOD FROM NATURE contains the fruits of that discourse. Thirtythree scholars from Europe and North America address the theme of Making the Most of Nature using a variety of theoretical approaches and perspectives. They highlight the complex relationship between people and the environment, how food and culture intersect, and how culture shapes the dietary choices that people make.