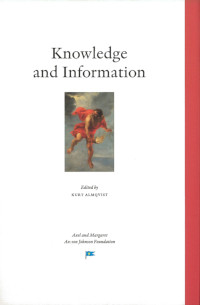 Knowledge and Information – Perspectives from the Engelsberg Seminar 2018

At the Engelsberg seminar in 2000 - entitled Visions of the Future and held at Avesta Manor in Dalarna, Sweden - the literary critic and historian Harold Bloom said that he feared "a future where everything is known, but no one is wise; all the information in the world cannot compensate if wisdom is lost to us." Bloom's remark, almost 20 years ago, sums up the fear that many participants expressed at the Engelsberg seminar in 2018. The texts in this anthology stem from the seminar, Knowledge and Information, which took place at Engelsbergs bruk in Västmanland, Sweden.

Who should be in control and to whom does the massive amount of information produced today belong? How will this information be transformed into knowledge and wisdom by us humans and individuals?

Democracy is a relatively recent political phenomenon and control of information can be used and misused by democratic societies and states just as much as by totalitarian regimes - as it is, indeed, also used by global companies which know more about us then we know about ourselves and which put that information to work for purposes that are purely commercial.