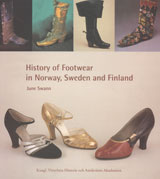 History of Footwear in Norway, Sweden and Finland

History of Footwear in Norway, Sweden and Finland is written and published on the initiative of, and with financial support from, the Agnes Geijer Foundation. The foundation was established by Ph.D. Agnes Geijer (1898-1989), a Swedish scholar of international repute. She was a leading authority not only on Scandinavian textile history, but on textiles in Central Europe and the Orient. During her leadership the Textile Department of the Central Office of National Antiquities in Stockholm achieved international acclaim for its high standard in research and conservation. Agnes Geijer’s scientific production covered a large field of textile research. Her unique knowledge was summed up in A History of Textile Art, a handbook for scholars and students.

The aim of the Agnes Geijer Foundation, which is administered by The Royal Academy of Letters, History and Antiquities, is to promote research on textile history in the Nordic countries. Since 1988 grants have been given to researchers from Sweden, Norway, Finland, Denmark and Iceland working on a wide range of projects from textiles in the Roman Empire to the production of damask in Sweden in the 20th century. Thanks to the foundation new publications on Scandinavian textile history have appeared and several standard books have been reprinted with updating comments. Since 1998 the Foundation has backed a professorship in textile history at the University of Uppsala, the first of its kind in Scandinavia.