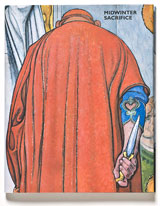 Carl Larsson's monumental painting Midwinter Sacrifice was installed in 1992 on the upper wall of the Nationalmuseum entrance. Its history is paved with controversy. The work, which Carl Larsson undertook on his own initiative, was completed in 1915. It was based on two medieval documents, Adam of Bremen's description of the temple in Uppsala, and Snorri Sturluson's Younger Edda.

Before the painting was hung in its current place, the photographer and writer Georg Sessler was able to take closeup photographs of Midwinter Sacrifice. The results are presented in this book, together with an introduction to Carl Larsson and the history of the painting, and the story of King Domald, as told by Georg Sessler. This illustrated book gives readers of all ages a unique opportunity to take a closer look at the details in Midwinter Sacrifice -- Carl Larsson's own interpretation of the ancient myth.